The Wunderlich curves are a collection of plane-filling curves, similar to the Hilbert and Moore curves. Each Wunderlich curve begins with a seed shape, and each successive iteration translates-rotates-reflects copies of the seed in a 3×3 grid in such a way that the end of one copy is next to the beginning of the next copy.

The first type begins with an S-shape, which winds from the southwest corner of its bounding square to end up in the northeast corner:

Copies are arranged in a 3×3 grid, with every other copy being rotated 90 degrees:

And finally the copies are joined in a sort of N-shaped route (up the left column, down the middle column, up the right column):

Repeating the process gives the first type of Wunderlich curve:

The second type begins with the same S-shape, but reflects (instead of rotates) every other S-shape in the grid before joining the copies in the same N-shape order:

The third type begins with a shape that winds from the southwest corner to the southeast corner, in a kind of R-shape. The copies of the figure are rotated and reflected as need be, and then joined in the same overall R-shaped path:

Like many plane-filling curves, variations of the Wunderlich curve have space-filling analogies in three dimensions. Start with a seed shape: 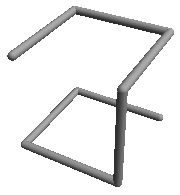 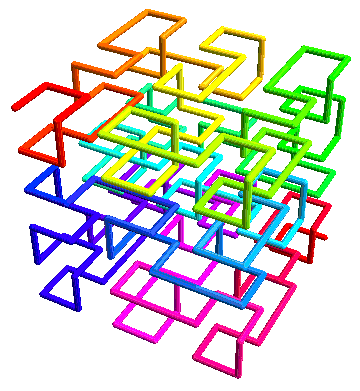 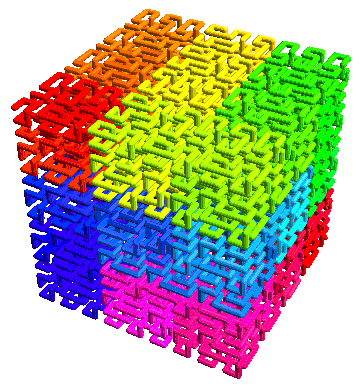 Of course many variations are possible by rotating and reflecting the seed copies in different combinations, along with joining them in different orders, but that’s another story for another time.